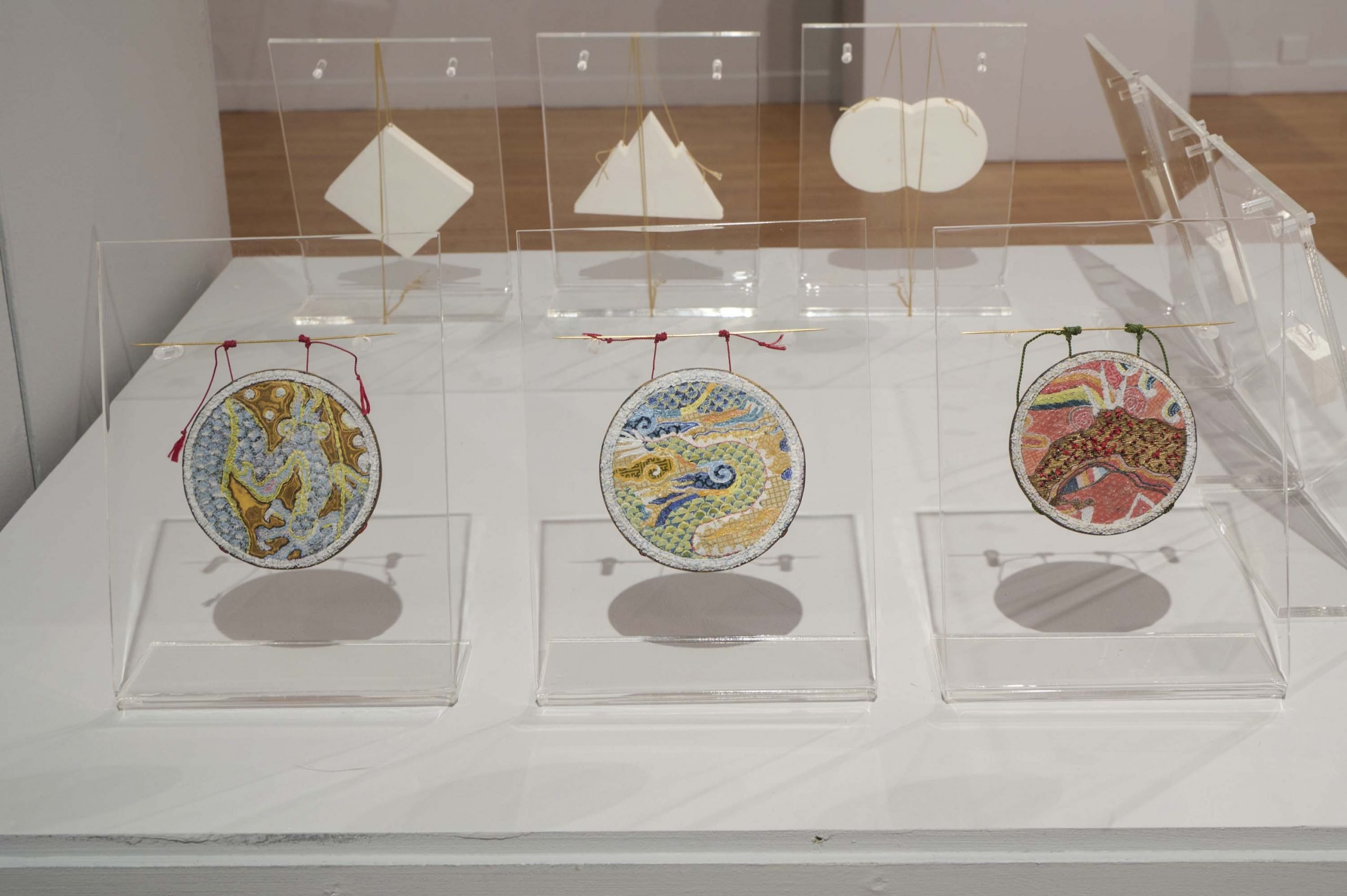 Craft and identity is one of the themes investigated in Meet Make Collaborate, a touring exhibition of new works by makers participating in one of three AAS international collaborations, currently on show at Inverness Museum and Art Gallery.

This selection of works give a flavour of the considered and fresh insights the exhibition offers into the many forms of identity and the influence it has on makers and making.

Ceramicist Susan O’Byrne (Scotland) and artist jeweller Mengnan Qu ( Canada) reflected on the cultural influences of the Silk Road between the East and West and drew parallels with technology today creating a new silk road era.   Influenced by the traditional Chinese form Cong which symbolises the structure of the world they experimented with material and techniques to create groups of sculptural forms which evoke an object being carried for transport.

Mengnan responded to an earth that no longer seems to be a sphere through the impact of the internet.  Taking motifs from Chinese sik embroideries, Susan created a series of three dragon brooches (image top/above) made from sheets of “homemade” printed poly-vinyl porcelain and extruded poly-vinyl porcelain threads inspired by a commercial material introduced to her by Mengnan.  Read more on residency in Susan’s blog.

Fiona Hall (Scotland) with Solidad Ruiz Mendoza and Dalila Cruz (Mexico)collaborated during a residency in Braemar finding connections through their grandparents ways of life, and the loss of these through transition, travel and modernity. They also connected through their use and respect of materials and local natural dye plants and in Braemar naturally dyed Merino Yarn with locally foraged Tansy and Buddleia plants going on to use these natural yellow dyed yarns as a basis for their works.

Fiona’s piece speaks of her identity as a Gamekeepers granddaughter. His way of life revolved around grouse shooting and moorland management, an integral part of the culture and history of their community, and it is part of her identity, but at the same time lost to her as a city dweller with no connection left to that community.  The work is about the fragility of the eco-system due to grouse shooting, the battle between the grouse and the moorland, parallel journeys and includes a Mexican Grecas – the symbol of life. Read more in Fiona’s residency blog.

A collaborative piece by Louise Barrington (Scotland) and Kiersten Holden-Ada (Canada) draws on Louise’s Orcadian cultural identity and relationship to the land and sea,  Kiersten’s identity as a queer non-binary settler (of Scottish and Irish descent) and each of their interdisciplinary practices. Emerging from a shared interest in experimenting with sound and light as craft materials, their audio-visual tapestry is an exploration of tension and expansion within ‘in-between’ times and spaces.  Read more on residency in Louise’s blog.

Alongside this,  a necklace study by Kiersten centres handmaking as an embodiment practice and a site of ancestral (re)connection premised on the belief that, as a white settler on Turtle Island, understanding lineage and acknowledging their roles in the context of settler colonialism is one small way of interrogating and unsettling white supremacy.

Sarah Paramor (Scotland) and Jennifer Green (Canada) used weaving and basketmaking to interrogate how place influences identity. The makers exchanged skills online, and wove together elements of Scotland and Canada, one using natural materials from their locale and the other weaving maps. Their work of two pairs of shoes, celebrates a self-reliant woman, Mary Campbell, from Applecross who in 1803 used her Highland skills to forge a fresh identity in Atlantic Canada. Read more on residency in Sarah’s blog.

Lynne Hocking-Mennie (Scotland) and Prach Niyomka  – Mann Craft (Thailand) collaborated during a residency at Cove Park on the west coast of Scotland when Storm Ciara hit Scotland.  The work Come Rain or Come Shine is based  on the weather pattern over one hour and considers the places of protection needed in a future where climate change causes rapid and violent changes in weather, and a single object needs to quickly change to provide protection from both intense sun and heavy rain/snow. Read more on residency in Lynne’s blog.

The Meet Make Collaborate exhibition is open until 19 June 2021 at Inverness Museum and Art Gallery.   Visiting is by pre booked slots through the museum website.

Read more about the project and participating makers.

The exhibition is delivered in partnership with High Life Highland Exhibitions Unit and Museums Galleries Scotland.

The project is funded by Creative Scotland, Edinburgh College of Art and Highlands and Islands Enterprise.

The cookie information text on this site was derived from content provided by Attacat Internet Marketing http://www.attacat.co.uk/, a marketing agency based in Edinburgh.